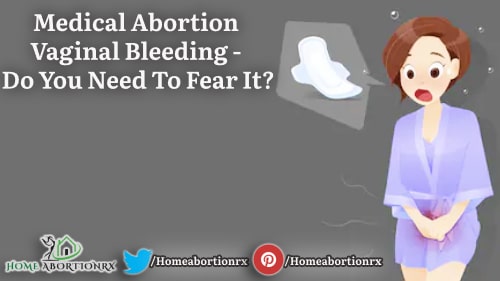 Vaginal bleeding is the most crucial part of the medical termination of pregnancy. It is a determinant factor in the success of the therapeutic abortion process. When you buy abortion pills online and get the pregnancy terminated, Misoprostol is one of the medicines that come with Mifepristone medicine. Misoprostol pill is the one that drives bleeding after-effect in the pregnancy termination process.

Mifepristone pill in the drugs does the vital work of stopping the development of pregnancy. With its components, it makes hormonal changes in the body to fight against progesterone hormone in the body. It eventually stops its growth within 24 hours.

Why do you bleed during a medical abortion?

Misoprostol pill in the abortion pill combination holds prostaglandin components. These pills shrink the uterine lining with hormonal changes. The contractions in the uterus cause pain in the abdominal area.

These after-effects bring about bleeding from the vagina. Vaginal Bleeding happens to remove pregnancy tissues from the body. Some women even see blood clots passing.

What type of bleeding is abnormal during a medical abortion?

What should you do when you don’t bleed during a medical abortion?

Since bleeding determines if your pregnancy termination procedure is getting completed or not, it is essential to check if you bleed or not within 24-48 hours after taking the Misoprostol pill.

If you do not bleed even after taking the four Misoprostol pills, it suggests that the medical termination of pregnancy is not in process. Most times, healthcare providers suggest taking another dose of Misoprostol on the same day.

You should be bleeding after taking the second dose of Misoprostol. In case you still not bleed after taking one pill of Mifepristone and eight pills of Misoprostol, surgical abortion is the only option left to successfully terminating the unwanted pregnancy.

If you have bought online abortion pills to end the unwanted pregnancy, you can take help from the pharmacy to know more about the medical abortion procedure.

The bottom line is that you do not have to fear the bleeding experienced during the medical abortion procedure since it is an essential symptom in the process. It should neither mistaken with the first menstrual period after abortion.