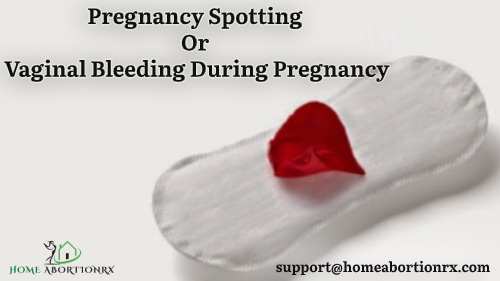 Spotting during pregnancy is not an unusual change to observe. Around 20% of women in the world say they see slight bleeding in their first-trimester pregnancy. Such bleeding during the early stage of pregnancy is typically lighter if compared to the menstrual bleeding. Similarly, even the color may be different in every case.

This blog guides women to understand spotting in pregnancy. This is not a sign of complication as many women have had spotting experience and yet they had a healthy pregnancy and delivery of the baby.

How is spotting different than bleeding:

If you’re wondering what’s spotting in pregnancy, it is the Vaginal Bleeding. It can possibly occur anytime during pregnancy. Such type of bleeding is often observed during the first trimester. While it can scare some women, it is not harmful. If you are using a panty liner, the bleeding should not cover the entire part. It has to be lighter in the flow.

On the other hand, “bleeding” is when you observe blood passing heavily. In such a case, you will require a pad to soak the blood in. If you find any such bleeding during your pregnancy, you should consult your gynecologist at the earliest. Share them what you are observing so that they can better tell you what needs to be done.

When should you consider bleeding during pregnancy normal?

Though bleeding during pregnancy is considered common, it is advised to speak to your healthcare provider to better understand the symptoms. If you’re in the second of the third trimester of pregnancy and encountering bleeding, you should inform your healthcare provider right away. This could be a sign of pregnancy complications. Heavy bleeding during the first trimester could also be alarming as it is a sign of ectopic pregnancy. Getting medical attention immediately may help control possible damage if any.

You can follow the instructions given below to reduce the chances of spotting or bleeding during pregnancy. Also, following the below guidelines can help increase the chances of a healthy pregnancy and normal delivery.

Though bleeding during pregnancy can seem scary, it is not alarming always. You should watch out the nature of bleeding and know more symptoms and changes taking place in the body. Keep your healthcare provider informed.

Women should note that there have been many cases where women have bled during their pregnancy yet had a healthy pregnancy. Light bleeding or spotting may not even affect the delivery of the baby.