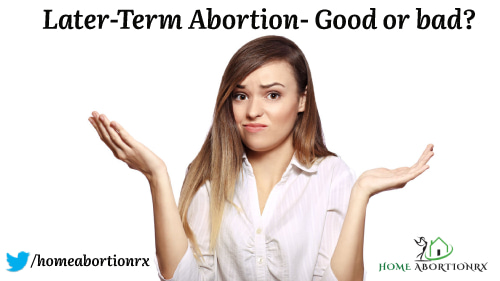 The later term abortion is termed when the woman undergoes an abortion in the third trimester of her pregnancy. Typically women use abortion pills for pregnancy termination if its gestation is not crossing the 9th week. However, for the second trimester, healthcare providers recommend surgical abortion.

Speaking of abortion in the third trimester, it is usually not recommended to have an abortion during this phase. Be it medical or surgical. After the gestation crosses its 21st week, the pregnancy stage becomes complex than ever before.

How is later-term abortion performed?

After giving certain abortion pills, the doctor softens and dilates the cervix. You have to perform a pelvic exam, following which the doctor uses a speculum to widen the vaginal opening.

After this, the healthcare provider inserts the dilating stick into the cervix and carefully removes the pregnancy tissues from the body. For this, the doctor also uses vacuum suction and other surgical instruments. Ultrasound guidance helps make the procedure less complicated.

What are the side effects of the procedure:

Hence, it is advised that women take the decision in the first trimester itself. If you get stuck into an unwanted pregnancy situation, you can speak to your partner or someone you trust.

Economically speaking, medical abortion is a low-cost solution to an unwanted pregnancy. Later comes surgical abortion within 21 weeks of pregnancy. The late-term abortion is comparatively expensive as it involves more risks and complications.